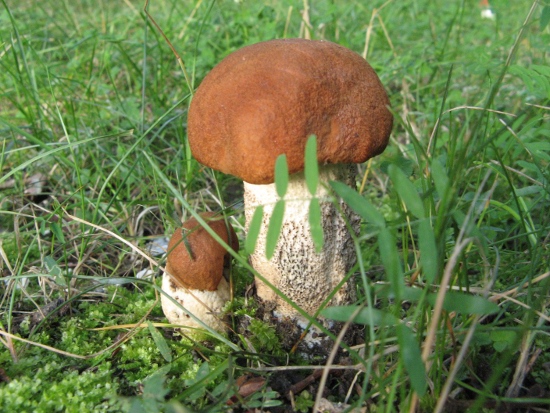 Mushroom hunting is one of activities with physical exercise and with the bonus of incredibly satisfying results. It’s a great way to get outdoors  and to catch the best reward. I love pretty mushrooms, although they always try to hide under grass, old leaves, tree branches, moss.
Boletus edulis and boletus pinophilus  (or White fungus) is the most-coveted mushroom among mushroom hunters because they’re meaty and aromatic and are easy to identify and safe to eat. It often grows in pine, deciduous  and mixed forests. (source:http://mushroom-collecting.com) 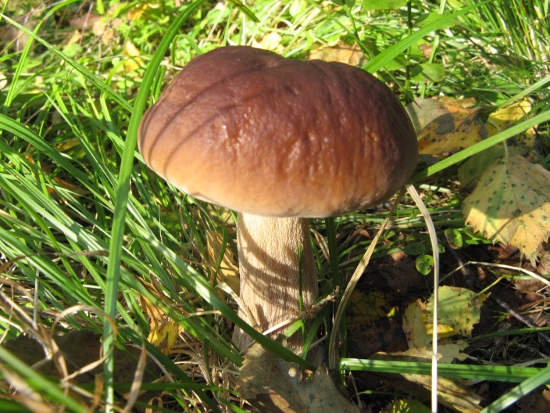 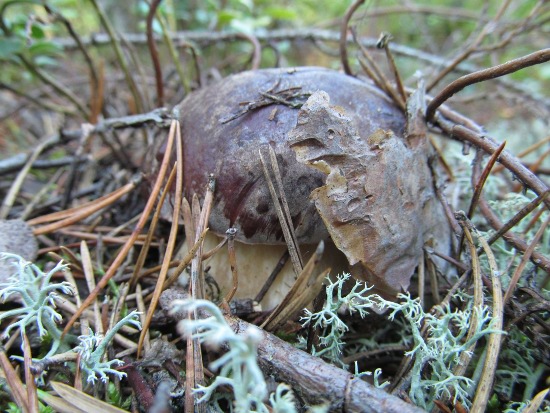 This one wants to look like any other thing but not a mushroom! 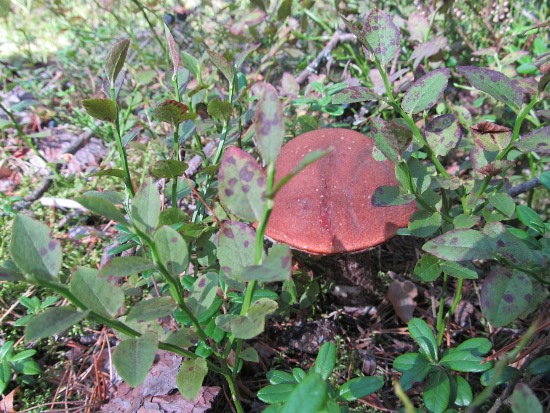 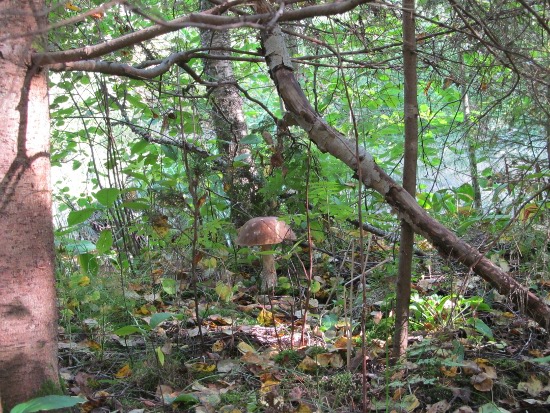 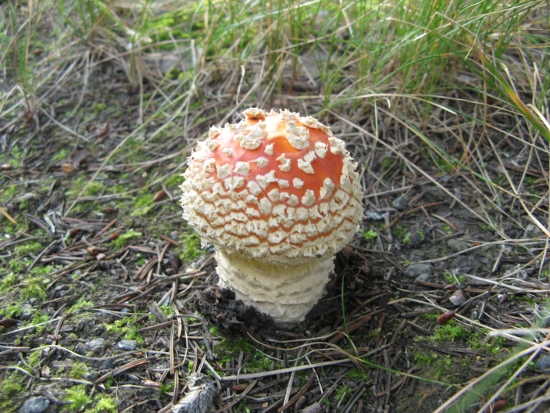 Ananita muscaria (Fly agaric)
Ananita muscaria  grow in woodland, or beside trees especially of birch and pine. Contains the toxin muscarine, which causes sweat-inducing poisoning. It is a common and widespread fungus, commonly depicted in children’s books and on Christmas cards around the world. (source: Kew Science)
I'm delighted to spot Fly agaric near a tree but I never put in my basket :D

Some people don't hunt Honey fungus that sometimes look like Fly agaric. Their color varying from yellowish-brown to reddish-brown, the disc darker with fine hair or scales. I always boil and them fry Honey mushrooms with onion and species, I love eating them in soup too. 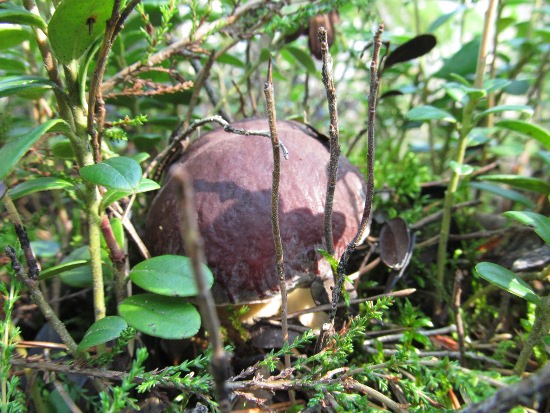 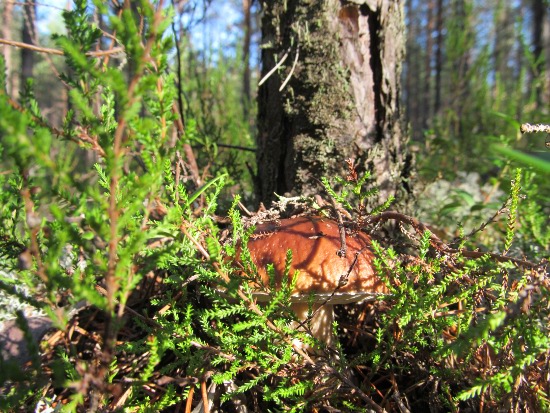 The Bolete is a very popular, delicious, meaty mushroom that grows all over the world. It has many names such as king, cep, porcini, steinpilz, penny bun, white and many others. Especially the king bolete is a favorite and familiar mushroom drawn, painted or sculpted by artists. The king is often very large and stately with a thick club shaped stem, thick cap and an impressive appearance. (source:http://mushroom-collecting.com)
I'm not very lucky in boletes or white fungus hunting and when I catch it, I' m happy! I cook soup, fry with potatoes, dry them for winter time. 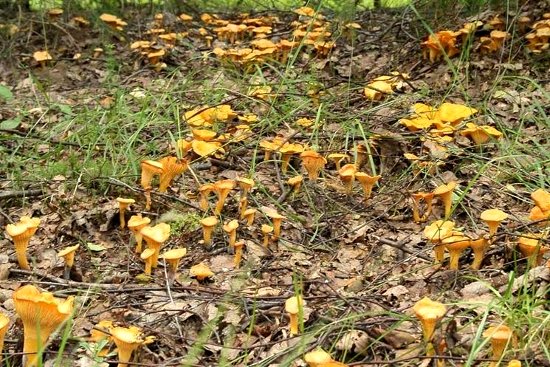 
The Chanterelle is found and enjoyed by people all over the world. It has many names, pfifferling, girolle, gallinacci, fox. It is fairly common and easy to spot and grows in great profusion some years. (source:http://mushroom-collecting.com)
To me it is very easy to hunt foxes because I can perfectly see them between grass or low blueberry bushes. When I find Chanterelles I sit and catch fungus around me :D. I fry them and cook soup or eat with veggies.

The photos of mushrooms were made in the woods near my summer cottage, Saint Petersburg.

Did you ever go to mushroom hunting? What did you catch? How do you use fungi?

Despite of autumn, the weather is warm enough and my garden keeps living like in summer. Asters, lilies, ligularia, phlox and of course hydrangea grandiflora reign in the garden. The tall, with large white-pink inflorescence hydrangea bush is sumptuously seen from the entrance. I'd chosen the right place to plant small thin hydrangea trunk 10 years ago. It grows and blooms happily near the gazebo, having sun from midday till evening. 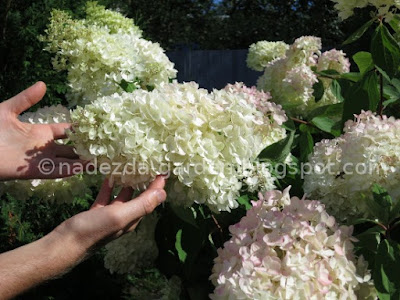 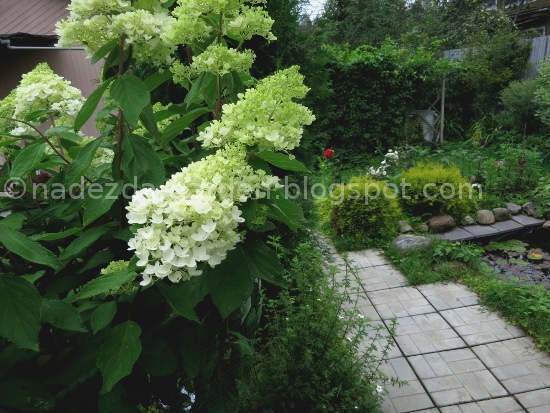 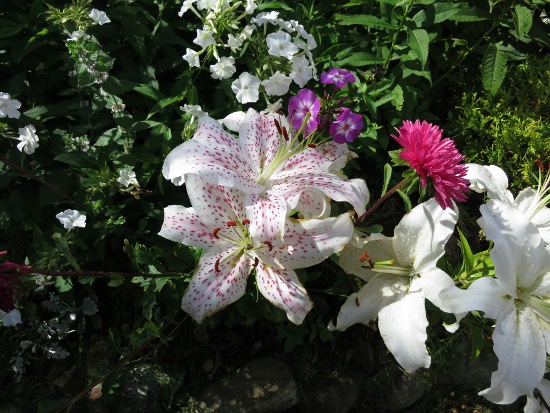 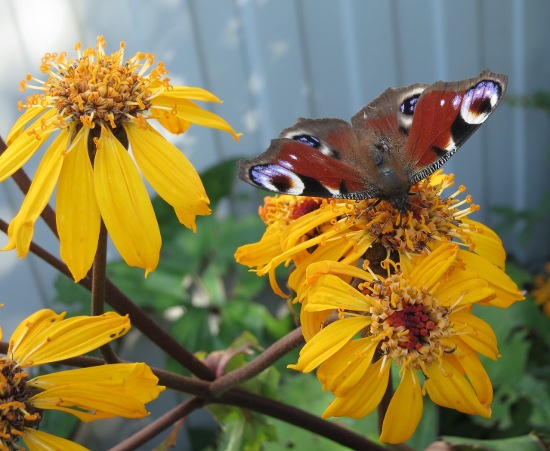 If you, my friends remember, I picked up a lot of redcurrant berries in my garden, see here. And I had to make something with this harvest,  so not thinking a lot I decided to make jelly of redcurrant juice and sugar (1:1). After boiling a mixture of juice and sugar about 20 min I canned jelly in some jars. Yesterday I opened one of these to see how this jelly is. It's very thick and it slowly drops off a spoon. It tastes like fresh redcurrant, sweet-sourly and is good for toasts. 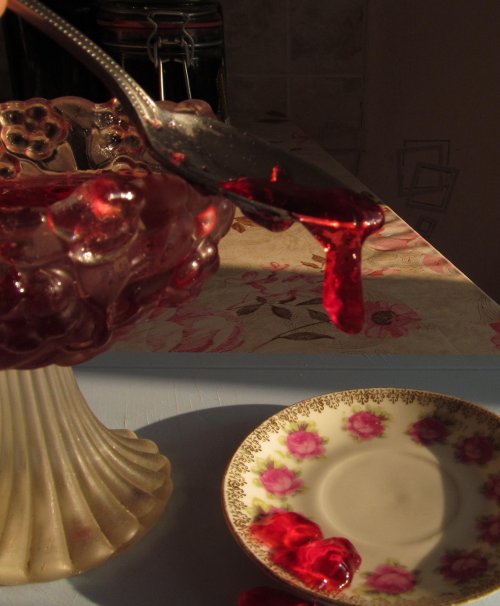 However the garden work isn't still too much. September is cooler than August, so I've been thinking about new warm clothes. One day I had had an interesting idea to unpick some knitted things that I don't wear now and very soon I had many hanks of yarn of different colors.
I've crocheted small squares using all yarns, squares are 40 and are unlike. Then I've put them along alternating between the colors and crocheted again one by one. 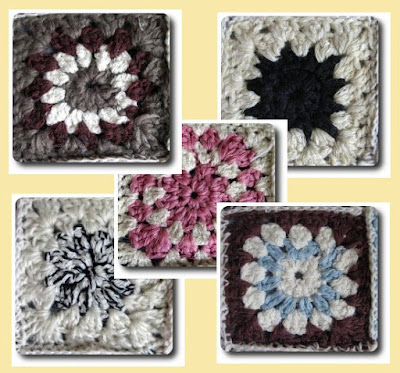 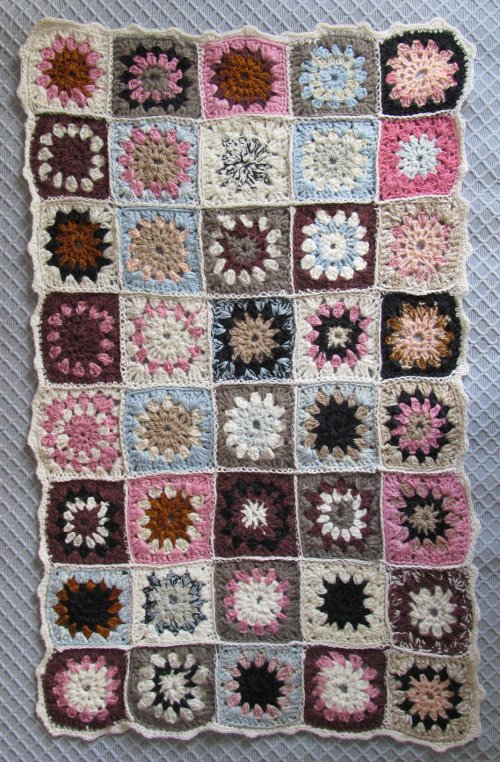 I crocheted by sides and ironed and here is a new plaid (40 x 150 cm) for winter evenings :). My new plaid reminds me gathered together flower heads.

How is your garden in autumn? Do you need to do something in this time? 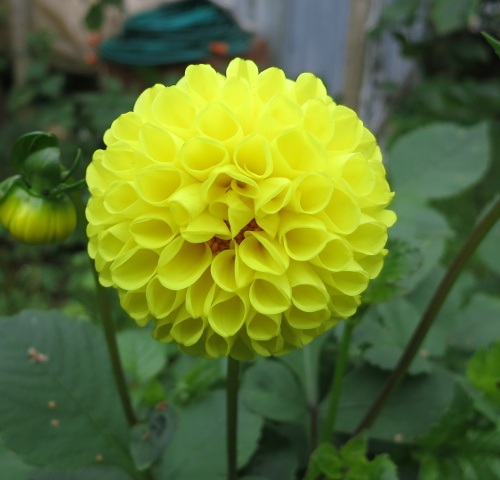 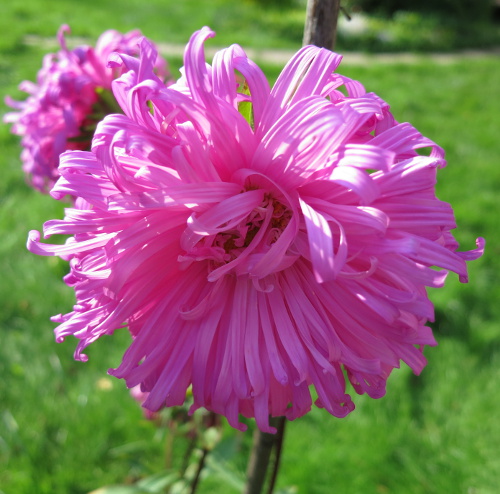 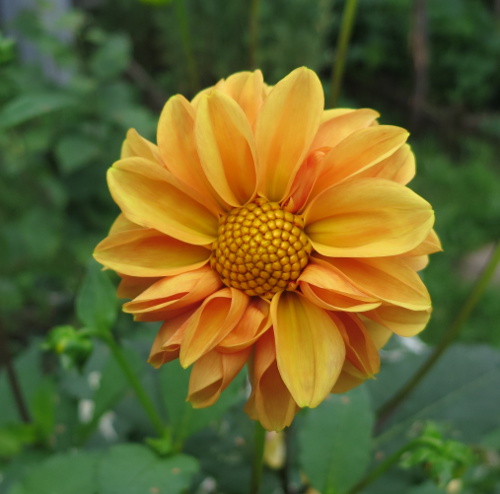 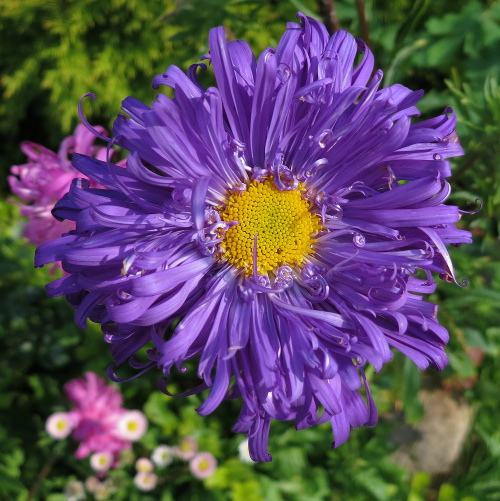 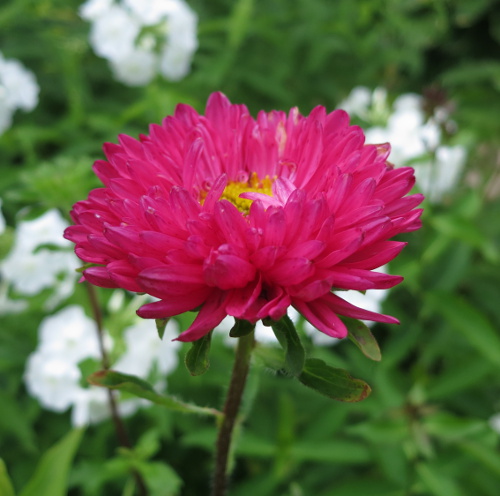 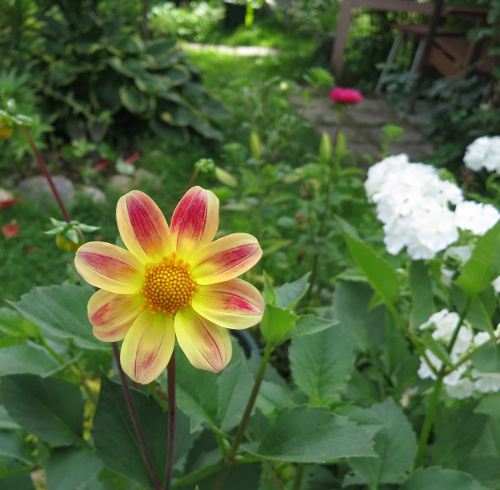 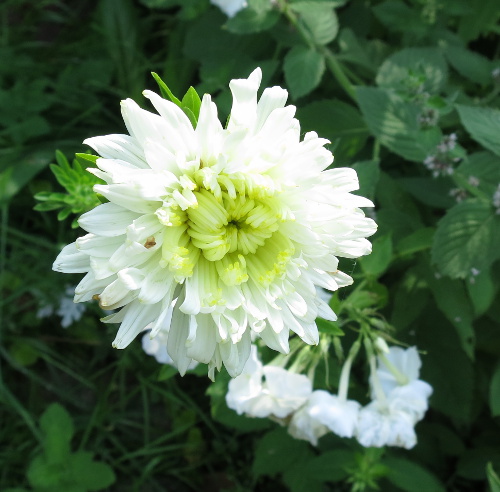 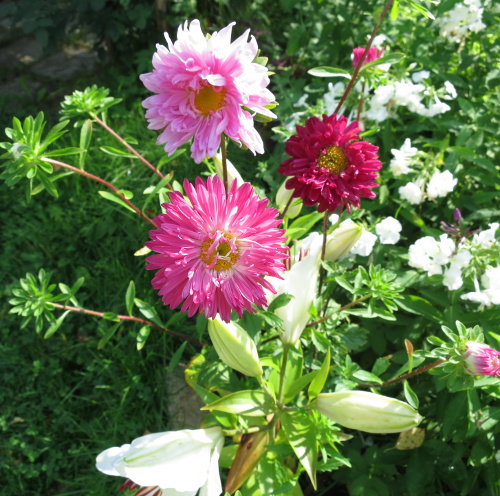 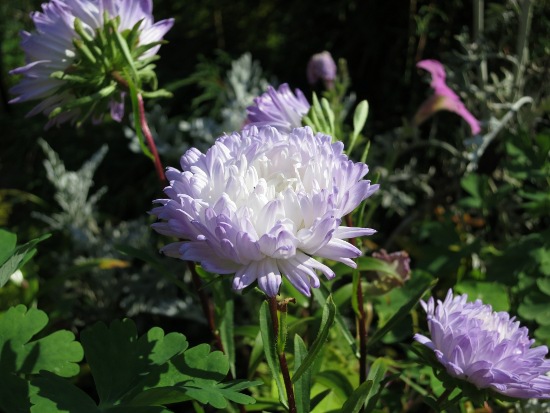 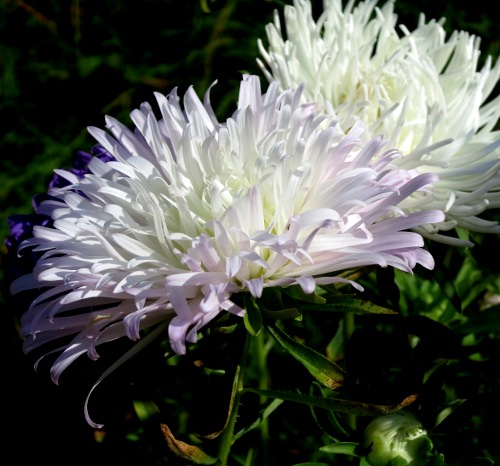 I've grown these aster and dahlia from seed, started in early spring on my windowsills.
Do you love growing annuals by your own or do you prefer to buy seedlings for your garden?
Posted by Nadezda at 9/05/2016 39 comments: