The Miracle of Nature In the Dragon Cave, Majorca

After traveling to the Mondrago Nature Park I decided to look at the Dragon Cave, which is located on the east coast of the Majorca island. Having early arriving I has got into the first group of visitors. I must say that is not allowed to go down into the cave by one and visitors were organized into groups.
The cave entrance was the deepening on the surface, then you go into a dark hole and see the steps leading down under the ground to a depth of 27 m. Along the walkway railings are installed, stages are lighted and tour guides were on descent turnings. 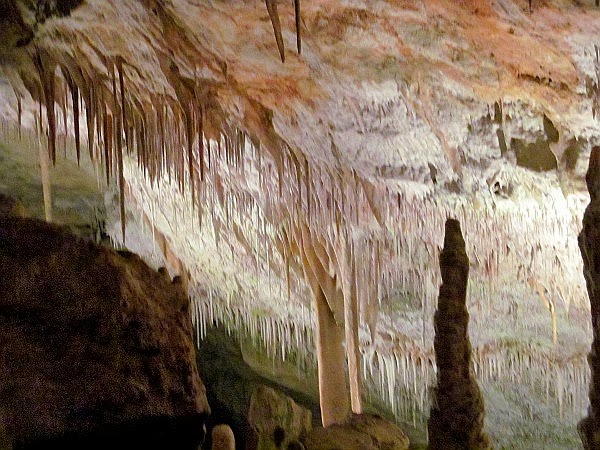 The first impression of the cave was: I've got into a magical land, with a magical forest, magical people and their king. 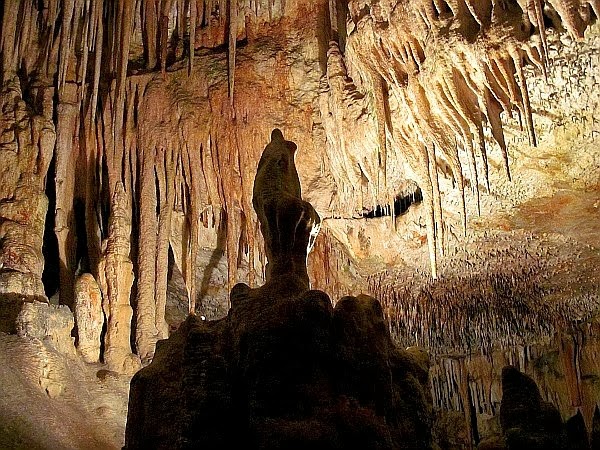 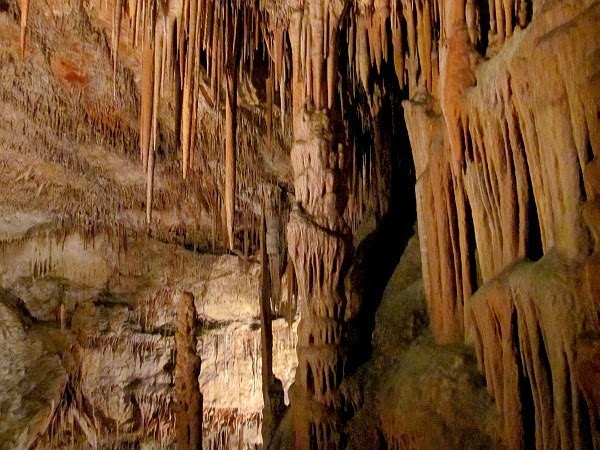 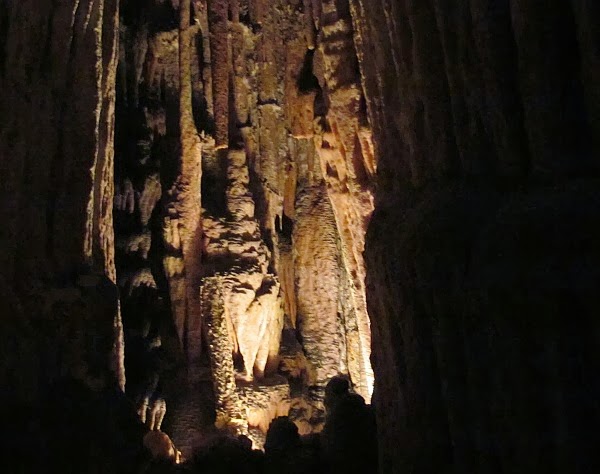 In nature, water gets into the cave slowly with rare drops through the thickness of the earth. The drops wash out calcium of the rock and stalactites are growing from the top down.
Dripping on the cave floor the water brings calcium crystals those begin to emerge in the stalagmites those are rising from the bottom up. Stalagmites are thicker than stalactites, because the water sprayes and scatters crystals.
This miracle of nature grows very slowly, hundreds and thousands of years and if the cave is not very high, the stalagmites and stalactites grow together over time. In the Dragon cave stalactites and stalagmites are lit of different colors, from orange to cool white. 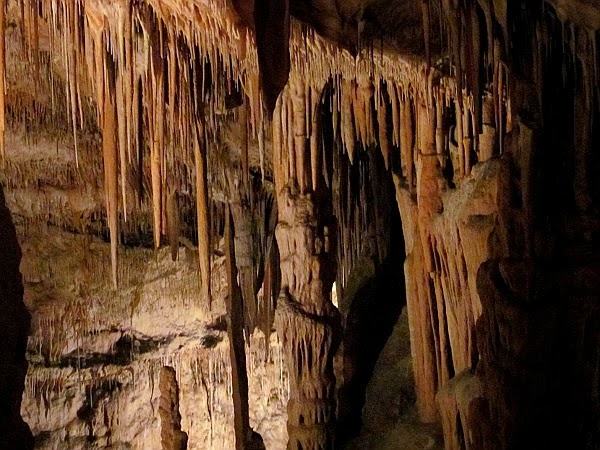 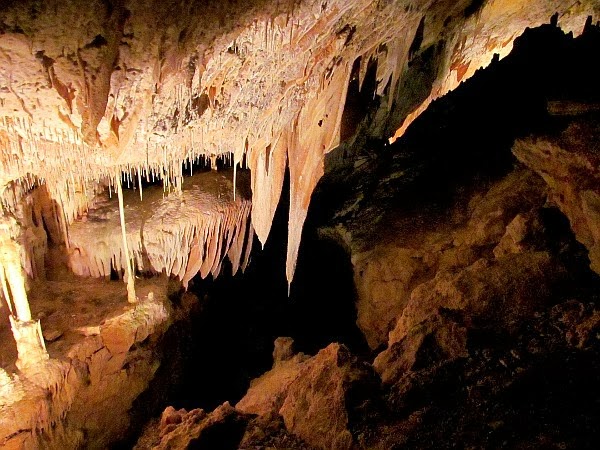 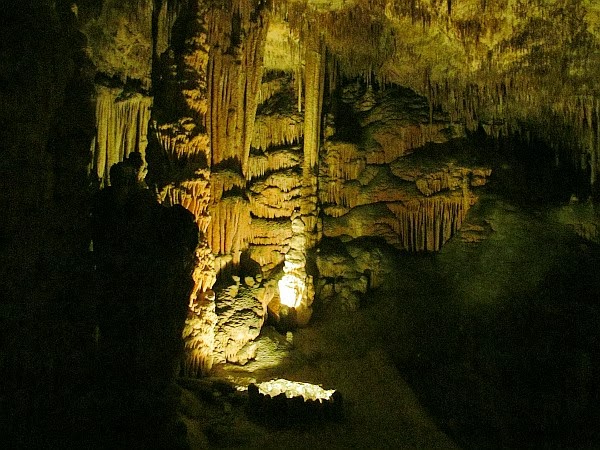 When we descended down greatly, it became wet and a bit chilly. Then I remembered the advice to take a sweater or a jacket. There in depth on the right I could see small blue lakes with crystal clear water and stunning reflection of "a magic forest" in the water. I could not determine the depth of these small lakes, so the water was very clear. 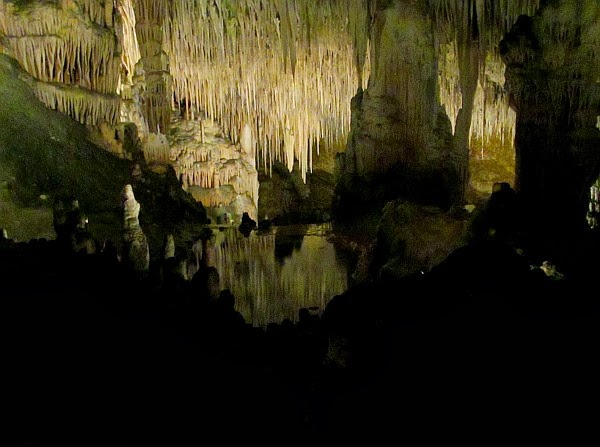 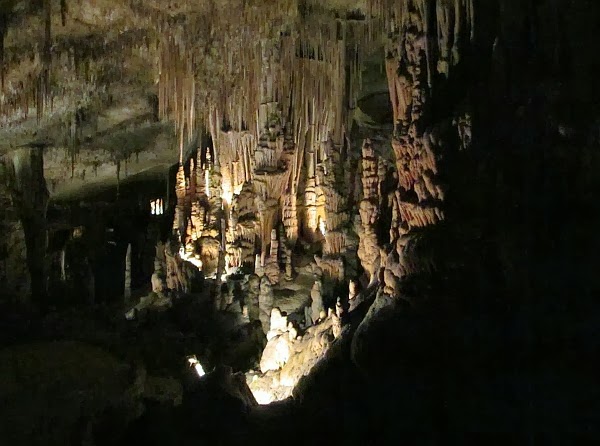 On the left I saw "branches and trunks" sought to away, forming niches and arches where it was possible to see the other "plants along the road." The lighting in the cave emphasized the shapes and patterns of stalactites and stalagmites. 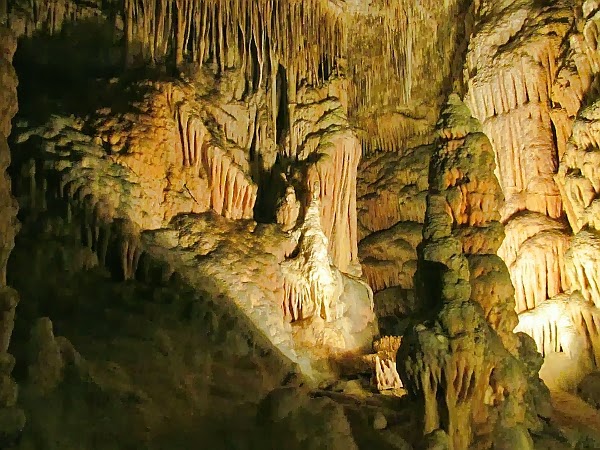 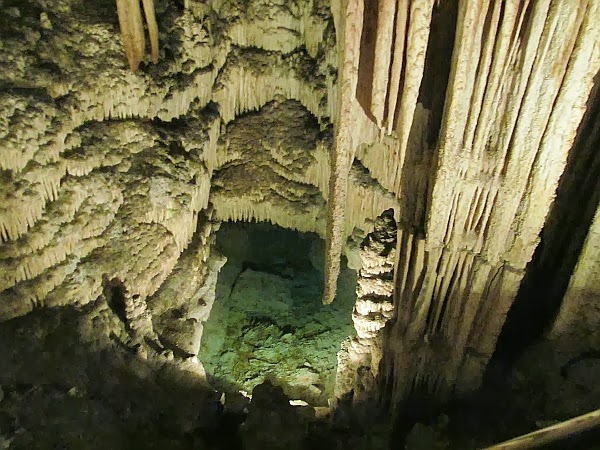 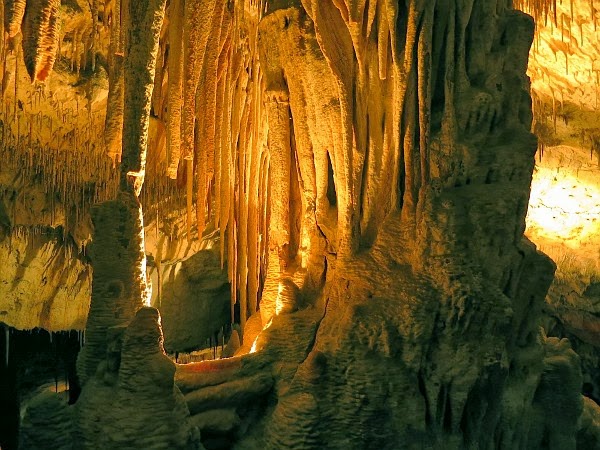 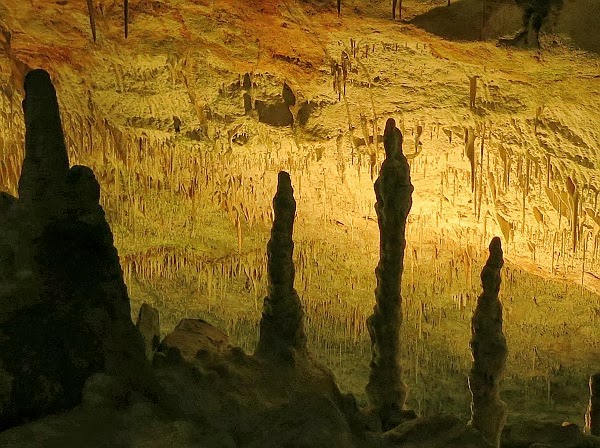 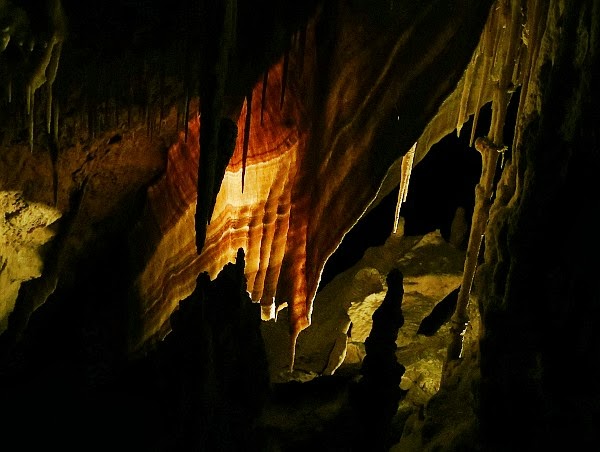 Going down lower and lower, I tried to take pictures of interesting colors and shapes combinations to show you the wonder of nature in this cave. Nature is generous to a surprising, not only on surface but also in depth. 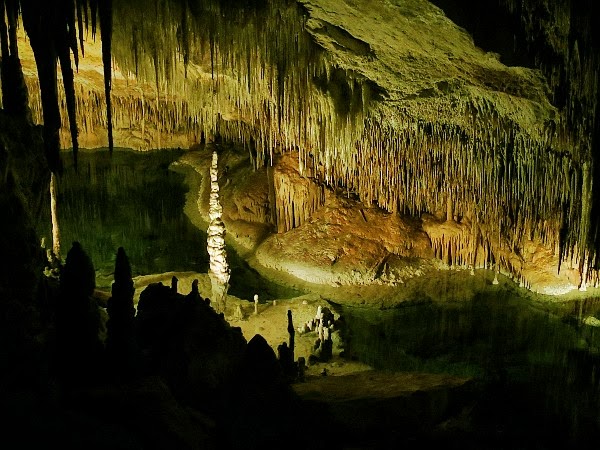 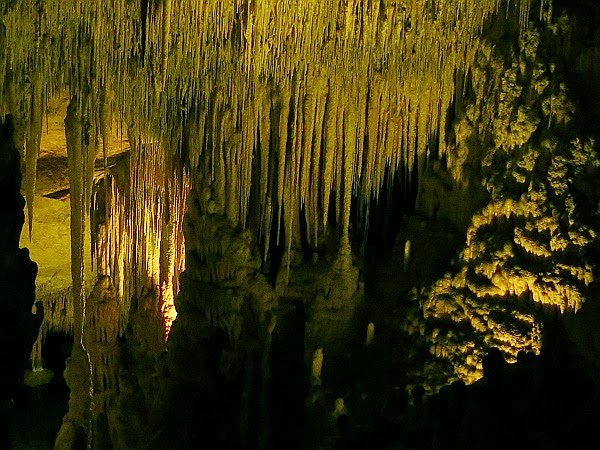 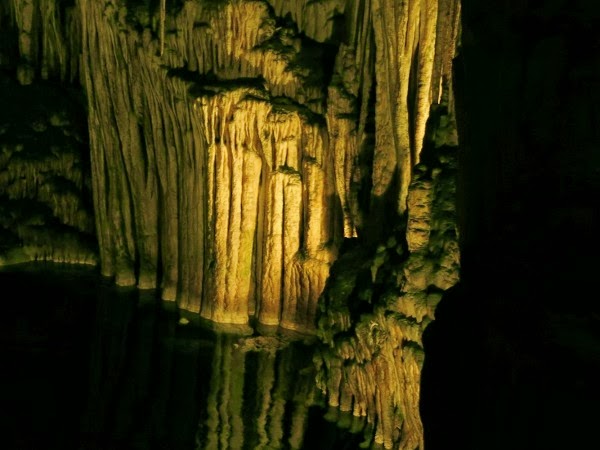 Finally, a huge underground lake appeared at the bottom of the cave. The water color was turquoise, a lake was deep, with pure distilled water. I was told that its depth is 20 m.
All visitors were invited to the amphitheater at the lake and the show began. When lights had gone out, the sounds of music were heard in the darkness and silence. At first I could not see anything, but then the boat lit garland lights appeared from the far end of the lake. Music floated over the water, and I could see the musicians in a boat. It was an amazing musical concert under the ground at a depth of 27 meters! 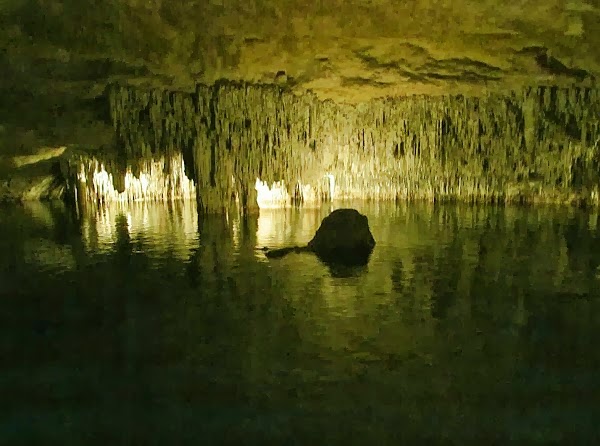 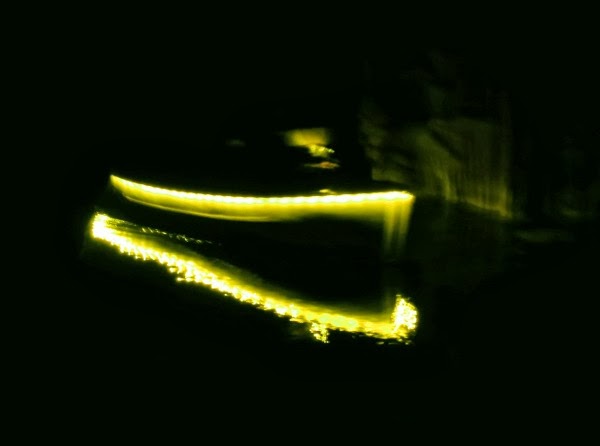 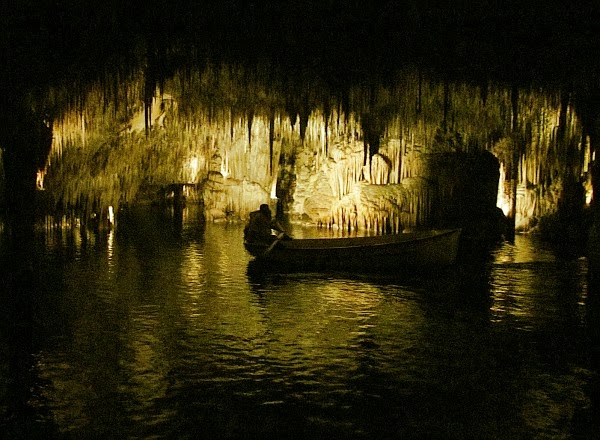 After the concert, all interested visitors could ride on the lake in boats. The return climb up was not easy, but there were places to rest and take pictures, the exit up was in elsewhere. 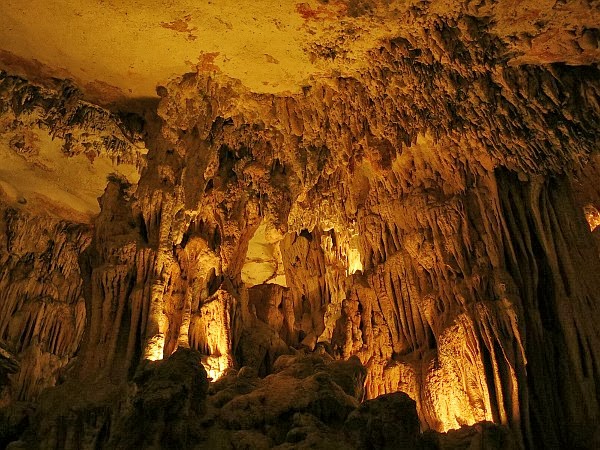 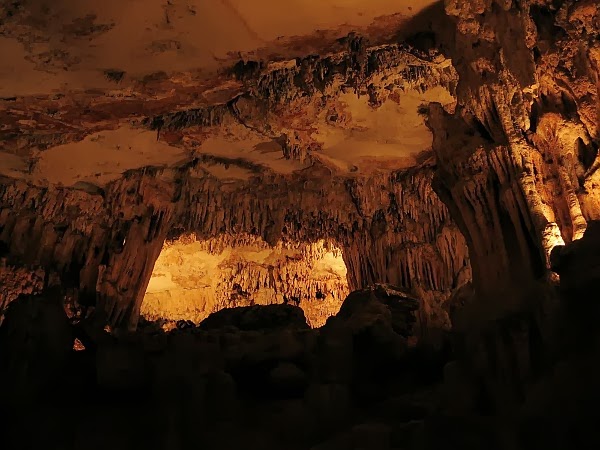 I came out to the surface a few meters from the entrance to the cave. A park with flowers, palm trees and cactus was around. 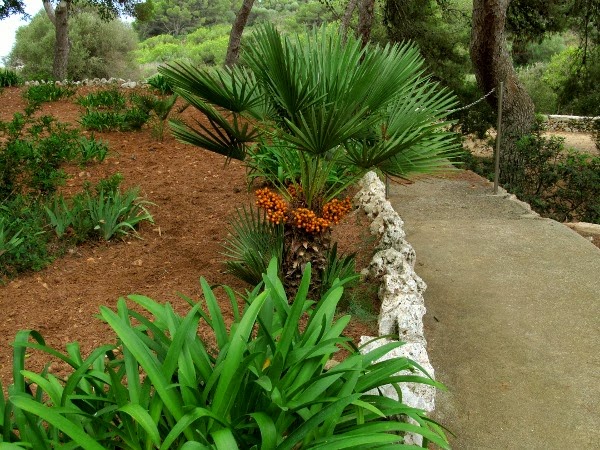 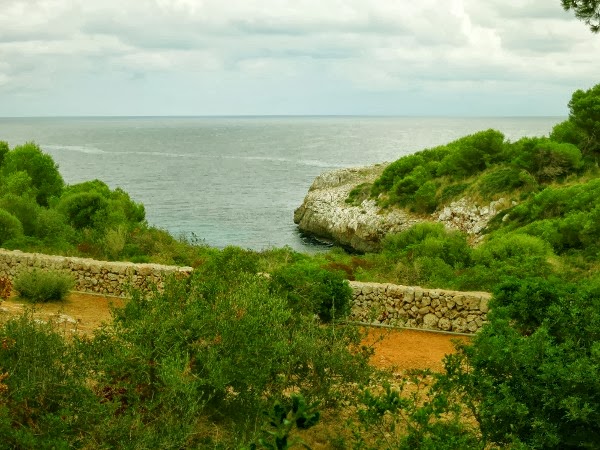 Here is my video about Dragon cave: